The Melonite® and QPQ process increases fatigue strength about 100% on notched components made from unalloyed steel parts and about 30-80% on parts made of alloyed steels. The hardness is maintained up to about 930°F and extends the surface life of steel tools and components exposed to heat.

The coefficient of friction both under dry conditions and after lubrication with SAE 30 oil, measured by an Amsler machine. All samples were lapped to a roughness of Rt = 1 µm after their respective surface treatments and before testing. Without lubrication the nitrocarburized QP had the lowest coefficient of friction, being less than half of that of the hard chrome or case-hardened surfaces. The lowest friction level occurred when nitrocarburized QPQ is lubricated. It is 3-4 times lower than that achieved with the chrome or martensitic surfaces. 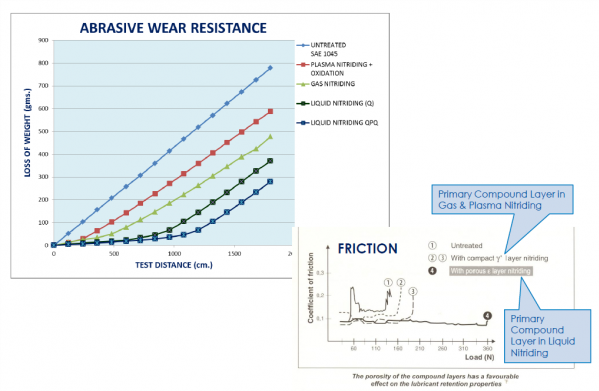 These results show the direct effect of increased oxidation as it relates to friction on the surface of the nitrocarburized samples. The QPQ sample, with its extra post-oxidation step, has a much higher friction value than the QP specimen, which had part of its original oxidation in the compound layer removed by lapping. However, with this variant, due to the fine micro-porosity in the QPQ sample which causes the lubrication to adhere better to the surface, this option gives the lowest friction value.

If a uniform running behavior is required, the QP process is appropriate. Lubrication has only a slight influence on the coefficient of friction because the oxide layer of the outer surface was removed during the polishing operation.

It has been determined that, unlike with chrome surfaces, the coefficient of friction of nitrocarburized QP and QPQ treated surfaces remains constant, even at varying sliding speeds.